Talking to a Stranger 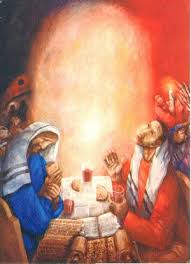 Talking to a Stranger

One of the strangest features of the resurrection narratives is precisely this theme of the otherness, the unrecognizability, of the risen Jesus.  Three major stories (Luke’s Emmaus episode, John’s account of Mary Magdalene at the tomb, and the ‘Galilean fantasia’ which concludes his Gospel) underline the point.  Whatever the experiences of the disciples at Easter were, it is hard to deny that this element must have played a part—that for some at least, the encounter with the risen Jesus began as an encounter with a stranger.  And this is one of the most important pieces of evidence counting against the suggestion that the risen Christ is to be seen as a projection of the community’s own belief its sense of continuity with the identity of Jesus.  In the Emmaus story, Jesus sharply rebukes Cleopas for his failure not only to grasp the foreordained character of Messiah’s sufferings but to make the connection between suffering and ‘glory’, between the cross and creative freedom and power.  Jesus condemns the inadequacy of their earlier understanding: he is not what they have thought him to be, and thus they must ‘learn’ him afresh, as from the beginning.  Once again, John crystallizes this most powerfully by presenting the disciples in their fishing boats, as if they had never known Jesus: they must begin again.

So the void of the tomb, and the unrecognizable face of the risen Lord both speak of the challenge of Easter to a God who is primarily ‘the God of our condition’.  The Lordship of Jesus is not constructed from a recollection but experienced in the encounter with one who evades our surface desires and surface needs, and will not subserve the requirements of our private dramas.  The Church is not the assembly of the disciples as a ‘continuation’ of Jesus, but the continuing group of those engaged in dialogue with Jesus, those compelled to renew again and again their confrontation with a person who judges and calls and recreates.  The Church may be Christ’s ‘Body’, the place of his presence; but it is entered precisely by the ritual encounter with his death and resurrection, by the ‘turning around’ which stops us struggling to interpret his story in the light of ours and presses us to interpret ourselves in the light of the Easter event.  The ‘Body’ image is one of many…Christ is with the believer and beyond the believer at the same time; we are in Christ and yet face to face with him.  Christian worship and spirituality wrestles continuously with what this means, as it both addresses Christ directly, and speaks his name to God as ‘Abba’.  Jesus grants us a solid identity, yet refuses us the power to ‘seal’ or finalize it, and obliges us to realize that this identity only exists in an endless responsiveness to new encounters with him in the world of unredeemed relationships; to absolutize it, imagining that we have finished the making of ourselves, that we have done with desire and restlessness, is to slip back into that unredeemed world; to turn from the void of the tomb to the drama of a cheapened Calvary for the frustrated ego.