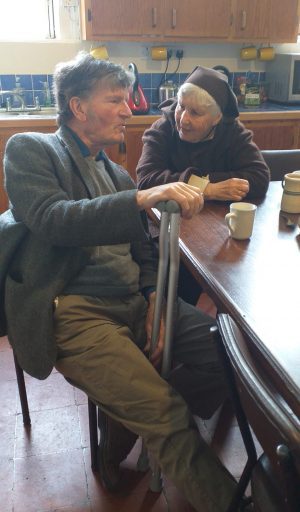 Words of Wisdom from Paddy Rolleston

Paddy has been in Friends of Carmel since we began in 2015. He is coping with progressive Parkinson’s and has some difficulty with speaking.   We asked him to give us some words of wisdom.  The following is an excerpt from his contribution.

The Dalai Lama begins a book on the meaning of life with the statement “We all want happiness and wish to avoid suffering.

Being happy is not as easy as you might think.  We all aspire to it, but I know no one who has obviously achieved with anything like the joy that  many look forward to in heaven.

It seems to me that we live in the intersection of two worlds, the material and the spiritual which appear to be entirely opposite in their ways of achieving happiness and escaping suffering…  Status is of no concern to the spiritual person who sees his role as one who serves. Don’t aim at success.  The more you aim at it and make it your target, the more you are going to miss it.  For success, like happiness, cannot be pursued.  It can only ensue, and only as an unintended side effect of one’s dedication a cause greater than oneself.

“If you choose you can keep his commandments, to act faithfully is a matter of your own choice.

He has placed before you fire and water…Stretch out your hand for whichever you choose.”

Every choice is a precedent.  It makes it easier to make the next choice in the same direction.  The chains of habit are so weak that they cannot be felt until they have become so strong that they cannot be broken.  Victor Frankl says that “The last of the human freedoms we lose at death is the ability to choose.”  Man is ultimately self-determining,” he tells us.  That ability to decide is at the centre of our being.  “Man does not simply exist but always decides what his existence will be, what he will become at the next moment.”